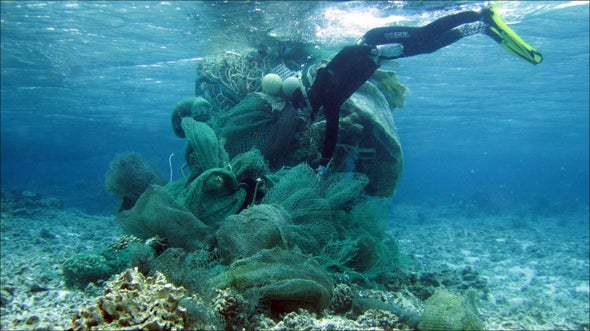 Not far off the islands of the Republic of Vanuatu, a deserted trawl-fishing net undulates in the azure tropical Pacific. No one knows whom it belonged to or how it was lost, but it has twisted around a delicate garden of coral and damaged the reef.

It is just one example among at least 640,000 metric tons of fishing gear that goes missing at sea each year, according to the United Nations. Known as “ghost gear,” it gums up ship propellers, entangles passing whales and settles atop sensitive habitats. A recent study estimates it accounts for nearly half of the large debris in the Great Pacific Garbage Patch. Because most is made of plastic, it does not biodegrade but instead breaks down into tiny particles that can enter the food chain and potentially harm animals and ecosystems.

Much of the research and cleanup efforts involving plastic ocean debris have focused on the bottles and bags that come from sources on land. But growing evidence ghost gear is also a major concern has catalyzed work to understand how best to clean it up, recycle it and (most importantly) keep it out of the water in the first place. “I went from feeling like this is such a niche topic and wondering how we were going to make any progress to now, [when] every day the phone is ringing with people who want to collaborate,” says Christina Dixon, the global campaign manager for the Global Ghost Gear Initiative (GGGI) of World Animal Protection, a nonprofit animal welfare organization.

Ghost gear is so ubiquitous it affects many of those who work at sea, from merchant shippers to ocean-floor mappers. Seismic survey teams (who image the seafloor subsurface for oil and gas exploration) often find themselves acting as ad hoc cleanup crews, says Gail Adams, spokesperson for the International Association of Geophysical Contractors, an industry group for companies that run ocean-floor surveys. The organization has set up a database to track the nets its members pull from the water in the course of doing business. Read more.